Finally, after a good 10 years since the first presentation of a layout extension to SBML, the specification has been sent to the SBML editors for approval. One might think it is actually quite easy to describe where something is, and it should not take all that long to agree on a bare minimum for a standard, but be that as it may, we are now in the final stretches. If you like, you could have a look at the specification:

It is of course fully supported by libSBML. Now that the specification is in the approved format for L3 packages, including a whole number of validation rules, validation is currently added to libSBML and will be available from the Online Validator with the acceptance of the package. In the meantime you could use the

Software support is shaping up: SBW has been supporting SBML Layout since 2005, and COPASI has it enabled in publicly released builds since last year. Both software tools also import CellDesigner annotations! At last years HARMONY meeting the layout specification has received its biggest change, by adding a GeneralGlyph, that makes it possible to also layout elements, that previously where not possible. Support for that is available in the latest SBW builds,

And within the COPASI codebase, to be released sometime soon.Here a screenshot, showing the exchange between COPASI & SBW of an SBML Level 3 model with a GeneralGlyph that represents an SBML Event, including Trigger and Event Assignment: 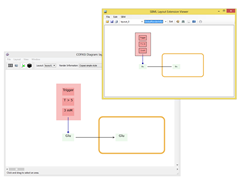