SBGN-ML, the markup language developed as part of the libSBGN project, is nearing it’s Milestone 2 release. The SBML Layout library currently fully implements the Process Diagram notation of SBGN-ML. (Work on implementing Activity Flow / Entity Relationship diagrams has started but is not anywhere close to ready.)

This is to announce a new online application:

This is how the page looks: 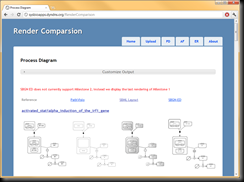 The site displays all current SBGN files from ProcessDiagram, ActivityFlow and EntityRelationship. Only the SBMLLayout column will be rendered every time. Information from PathVisio and SBGN-ED are cached and updated periodically.

You can change the directory, that is being displayed by selecting the Customize button on the top of the page, these options are available:

Where a different URL can be chosen (you could for example display the examples from Milestone 1 or the general examples). You also can display or hide individual columns.

As last option you can directly upload or point to any URL of an SBGN file that should be rendered.

And another release done in time for ICSB and COMBINE. This latest release of libSBML not only contains a number of bug fixes and general improvements, such as:

But also a new Conversion API.

So what is so special about it, and how would you use it? Previously we had a number of additional functions such as:

on the SBMLDocument. This meant that the document had to know how to do all these operations. Now we went ahead and introduced just one more level of abstraction:

When called this function will look through a registry and find the best converter that matches the options (uhm … or none, if that might be the case, in which case the conversion would fail). Then that converter runs on the document to change it. And reports the status.

We have created converters for the tasks mentioned above: setLevelAndVersion, expandFunctionsDefinitions, expandInitialAssignments and also stripPackage (which removes a specific SBML L3 package from the current document).

The biggest advantage of course is that all these converters are available from a registry, that means:

I have started with a first flattening converter (not complete yet) for the COMP package. So this might be something that package writers might want to consider, perhaps they would like their package to serialize to a Level 2 annotation or some such thing!

More on this at COMBINE, I hope to see you there.

Just before the ICSB, here a new release of the Systems Biology Workbench. Exciting for me, lots of updates on the standard support:

There also is a brand new JDesigner and Jarnac available, with lots of goodies. So please grab the new version from SourceForge before it gets cold:

Some of you might wonder what happened to the Linux and OSX release. I’m afraid it did not get done in time. Even though all modules and code has been updated to compile fine on 32 bit and 64bit Linux. So where is the holdup? As it turns out the latest distro’s don’t come with Mono 2.10, so I figured I wait a bit longer to make that release.

If someone needs those binaries sooner let me know and I upload them.

I’m pleased to announce that the new SBML online validator is now available for use:

The new validator has a number of new features, the most prominent: 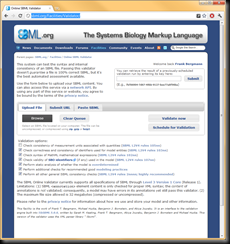 Of course it is still possible to use the validator remotely. For this we provide a REST API as before:

and additionally it is also possible to use the service via a W3C web service. Here the link to the WSDL: