Ninja to the rescue

Don't you hate all these long compile times? I've head of Ninja a long time ago, but never gave it much thought. In case you don't feel like following the page, Ninja is a replacement for make / nmake. So today I gave it a try:

Couldn't be simpler. I cloned the git repository, opened a VS command line, called bootstrap.py with python 2.7, and added the directory to the path.

I figured libSBML makes for a great test project, at least on my machine a build of it with tests takes forever. So I configured a new build of libsbml, release, static runtime, with tests. Thus the configuration line is:

and the build is ready to go. To collect timing information, i run using time:

And *drumroll*, time reported: 0.00user 0.00system 2:29.59elapsed 0%CPU. If you know Windows C++ builds (on non SSD drives), you know they take forever, so having all these projects build in two and a half minutes is amazing.

Just so you know, here the counter example, of using NMake as distributed by VS11. Here the configure line is:

So I couldn’t stop there, a compilation of libSBML on OSX  took (again with tests) 1m55.769 (vs. 4m4.568 for the regular make, and 2m2.698 for make –j 4). With universal binaries (i386 + x86_64) that time doubles as expected. Not too much of a difference. But this is made up by the fact that the output of ninja displays all critical things like warnings an errors nicely.

Today I used ninja for COPASI. Just as example: CopasiSE + CopasiUI + java bindings builds in just 4 minutes, 28! As compared to the 24m28 that nmake was using.

It seems obvious that using Ninja definitely saves a bunch of time, especially when compiling on Windows. The next thing to try is to use it as external build tool in VS!

For the Friday morning here a collection of links to software applications and databases all around flux balance analysis.

A couple of days I've published the COMBINE archive project to github. Today, I'm proud to let you know, that you can now upload / download COMBINE archive also to the SED-ML web tools:

If you rather try it offline on your Windows box, try the SED-ML Script editor:

It has been quite some time ago, that the COMBINE archive was proposed it seemed a simple enough format. I had a library for some time, but was not yet sure where to read it. As with any format, if no files are around there will be no applications written to support them.

In any case, since the conversion is going again, I’ve decided to put all the information about the library, and an first version of a graphical frontend for it. As with any experimental frontend it is written again for Windows. The links below have the details:

About the User Interface

When you open an archive in the application, you will find the following layout: 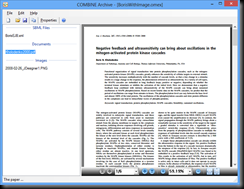 On the left you find the list of files contained in the archive, separated by their type, currently only a limited number of the COMBINE standards is recognized and an even smaller number can be interacted with, but that will change in the future. When you select a file, the systems preview handler will be used to generate a preview, as you can see in the screenshot with the PDF. Also recognized are images, and websites. Can the format not be determined, the file will be displayed as plain text, which may or may not be helpful.

If an SBML file is selected, it will be displayed as plain text. But if you have SBW installed, you will see this pane on the top:

That will allow you to open the file immediately for simulation / editing with one of the defined favorite applications. Or you could choose any other installed SBW Analyzer. The next version will allow you to simulate SED-ML files, and view SBGN files … stay tunes! I’m also working on an online version for sysbioapps.