It is official, the SBML Level 3 Package for Flux Balance Constraints has been released! In its first version it allows to efficiently store constraints of Flux Balance models along with objectives to be met. 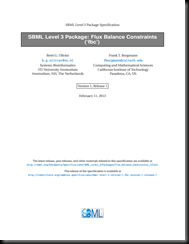 You can find the full specification online under:

As of today the next release of libSBML (5.8.0) has gone into code freeze, that will include the FBC package, along with full validation and conversions from SBML Levels that use the COBRA annotations to SBML Level 3 models with the FBC package. This new version is bound to be released by the end of the month. In the meantime nightly windows builds can be found on our build server.

With this release I’ve also made a new version of my FluxBalance tool available. Version 1.7 now already uses the COBRA importer, and has been redesigned to efficiently compute flux balance solutions for even genome scale models (albeit the loading of these models still takes a while).

A big thanks to the SBML editors and the community to make this possible!

As you might have noticed there is a new online service available on sbml.org, the SBML Test Suite Database. We of course had the SBML Test Suite for quite some time, with an amazing number of 1196 tests (to date), that now also include tests for the Flux Balance Package and even Hierarchical Modeling. This new application lets you browse all these tests, filter for tests (for example: Show me all tests, that test ‘RandomEventExecution’) and  download a selection of tests right there. 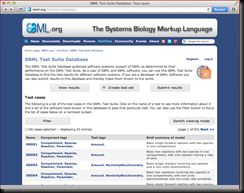 At the heart of course is the capability to *upload* a zipped set of test results, and analyze them for yourself in a private area, and once you are happy with them have them published publicly for the world to see. I’ve am working on a new version of SBW, that uses the 5.7.0 version of libSBML. And here is what a result for RoadRunner would look like: 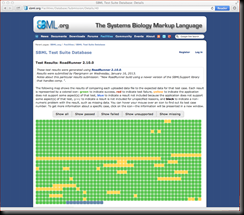 As you can see in yellow, RoadRunner will still not support AlgebraicRules, FastReactions or CSymbolDelay. However, libSBML will flatten comp models for RoadRunner, and so all comp tests that do not use the above mentioned elements will work just fine.